On Friday March 3, young Bricklaying tradesman Adrian Clark joined the list of young Queensland bricklayers taking on the world – this time, as a recipient of one of just three overseas training scholarships awarded by the Queensland Overseas Foundation (QOF) for 2017.

All recipients were eligible to apply, having participated in WorldSkills 2016 competitions.  Adrian Clark, who lives in Rocksberg, north of Brisbane, trained with BIGA and works at Legacy Construction, Burpengary.  Through their scholarships, these recipients will be given the exciting opportunity to live and work overseas in the country of their choice for up to two years, with initial support funds to help them settle in.

The Queensland Overseas Foundation Inc. provides vocational education and training to graduates and professionals with the opportunity to broaden their vocational horizons and improve their career prospects by working overseas.  Established in 1976, the Foundation is sponsored by industry and supported by the Queensland Government.

Adrian was the first EVER bricklayer to win one of these highly valued scholarships.  Congratulations Adrian on behalf of all at ABBTF, nationally.

The 2017 QOF Award Ceremony was held at Parliament House in Brisbane and once again we were honoured by the presence of our Patron, His Excellency the Honourable Paul de Jersey AC, Governor of Queensland and Mrs Kaye de Jersey.   I was pleased to attend on behalf of ABBTF, Qld and to witness another example of the opportunities that can flow from our trade.  Apprenticeships are available now!

In Adrian’s own words “Of all the places that I expected bricklaying to take me, Parliament House definitely wasn’t one of them”.  Adrian is now off to the UK and Europe where he hopes to learn more about Heritage and Historic brickwork, something he is eager to pursue in his career.

The other two scholarship winners were in the vocations of business studies and meat processing (retailing).  Adrian was part of the Qld contingency that competed for the 2016 National WorldSkills Australia bricklaying competition in October in Melbourne, shown below. 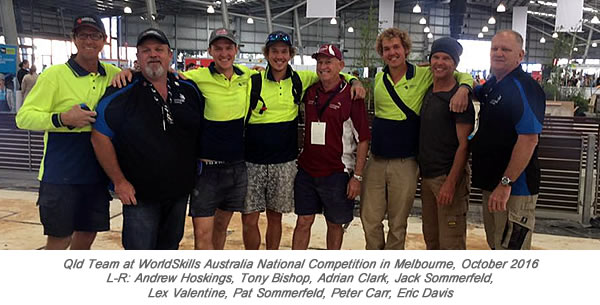 One Response to “An unexpected trip to Parliament for Awarded Bricklayer”